After recording a few times during the week at Nethergong where Tawny Owl, Barn Owl, Teal and Gadwall (59) were all heard, I made sure I put a few mealworms down in the area the Water Rail has been seen in hoping that this weekend I could fit in a hide session. As it happens, the forecast for Saturday morning was sunny and a frost so I arrived just as it was getting light and put up the hide and placed a few mealworms out. It was a lovely morning with birds already singing but I had to wait over an hour until the Water Rail turned up. As skittish as ever, it made brief visits on to the path to pick up the worms before running back into cover. It was a pleasure just to watch this secretive bird up close and a few pleasing photos were obtained. As is often the case, just as it was starting to venture out into the open, my time was up and had to return home. With cloud forecast for this morning I had a walk around the area and surrounding fields where I managed to see or hear 1 Woodcock, 3 Tawny Owl, 2 Grey Heron, 5 Snipe, 1 Jack Snipe (60) flushed from a flooded field, 1 Barn Owl, 1 Stonechat, 2 Common Buzzard, 2 Yellowhammer, 1 Cetti's Warbler, 2 Mistle thrush, 1 Reed Bunting (61), 1 Raven (62) on pylons eventually chased off by a Peregrine, 3 Bullfinch and 1 Greenfinch (63). I unfortunately also found a dead Common Snipe under the pylons. Hopefully the night recording will pick up soon as in the next few weeks the birds will start to move. With my knee operation in less than two weeks time, I won't be getting out much on foot during February so am relying on the night time recording to deliver something good. 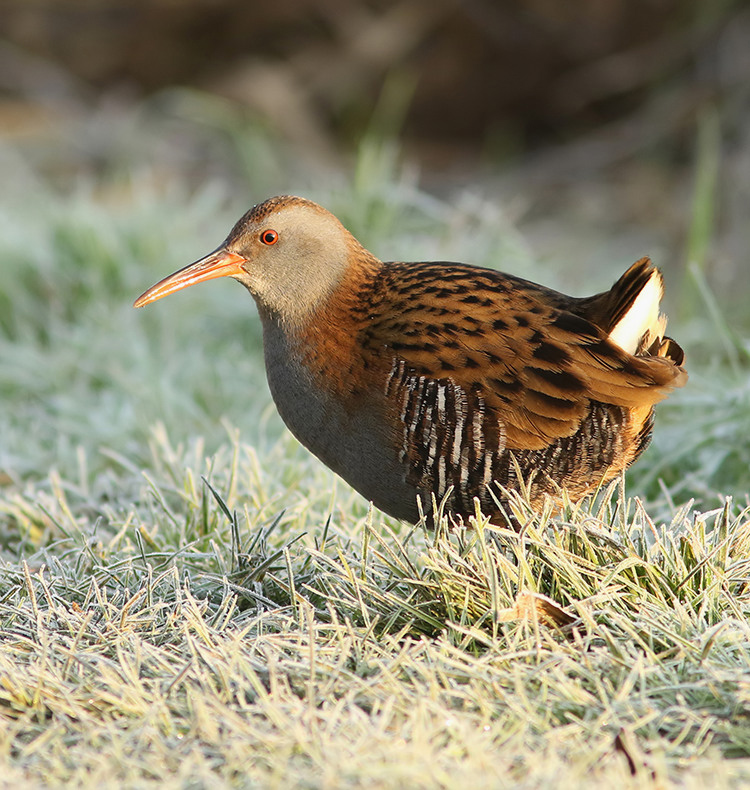 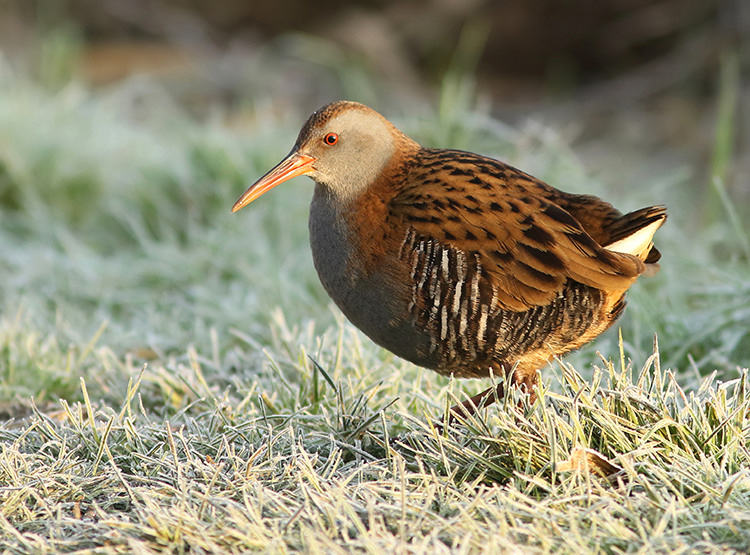 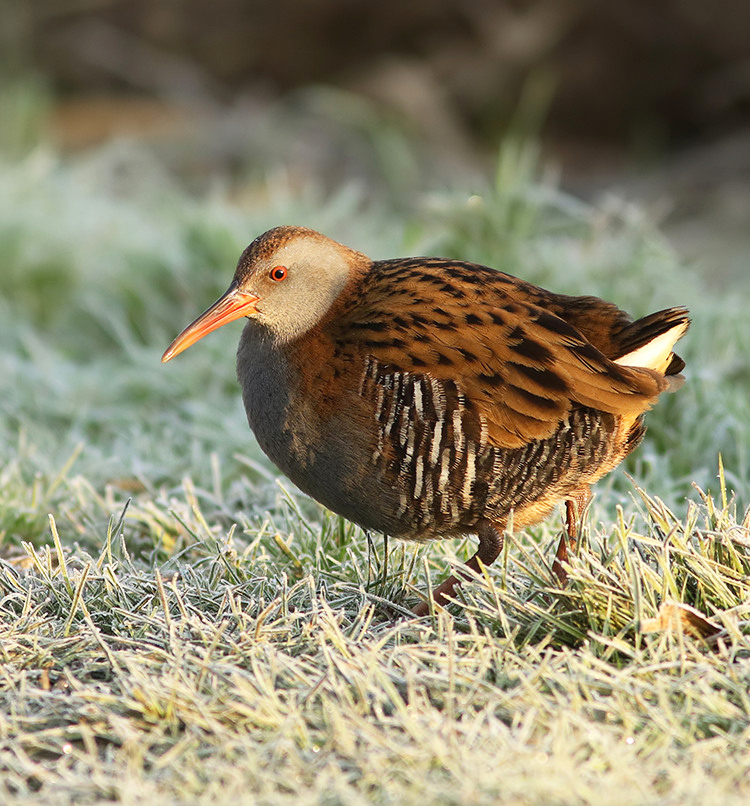 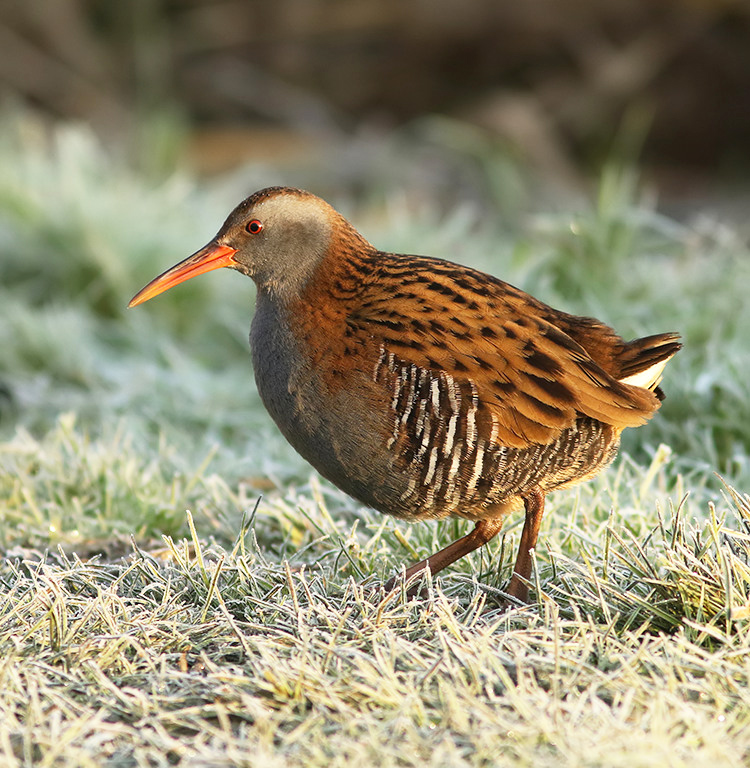 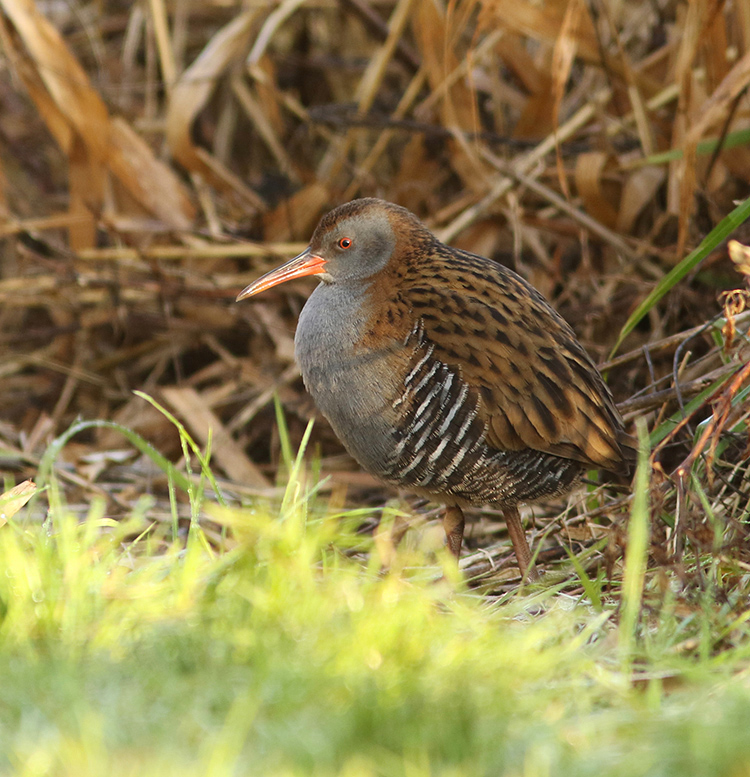 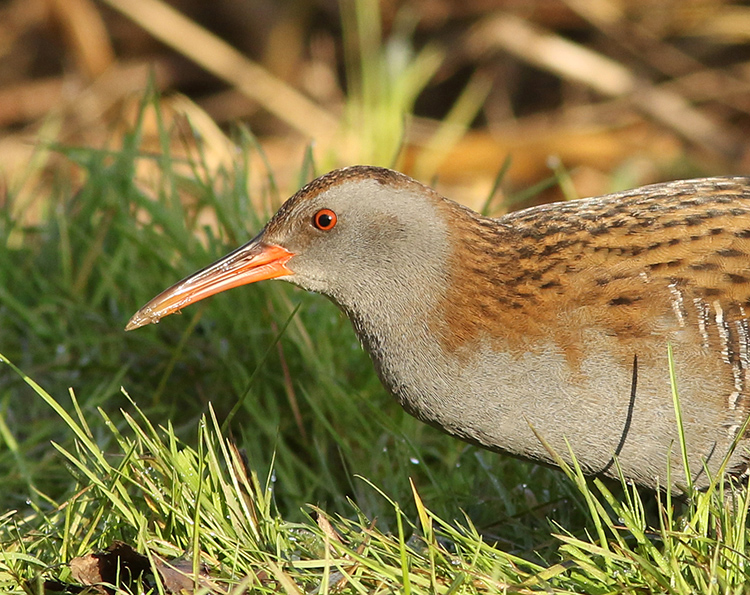 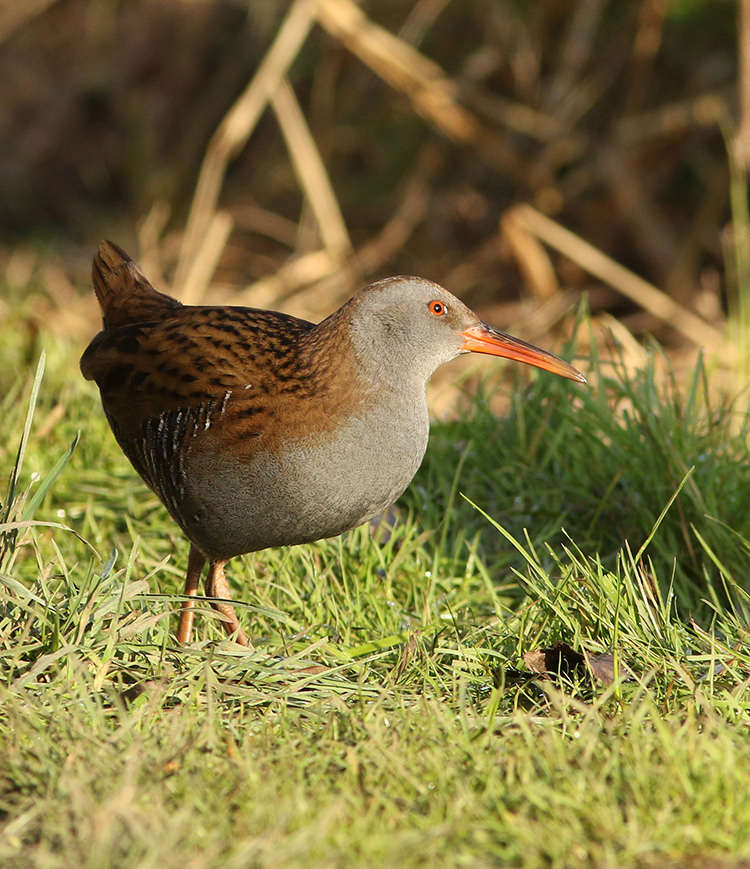 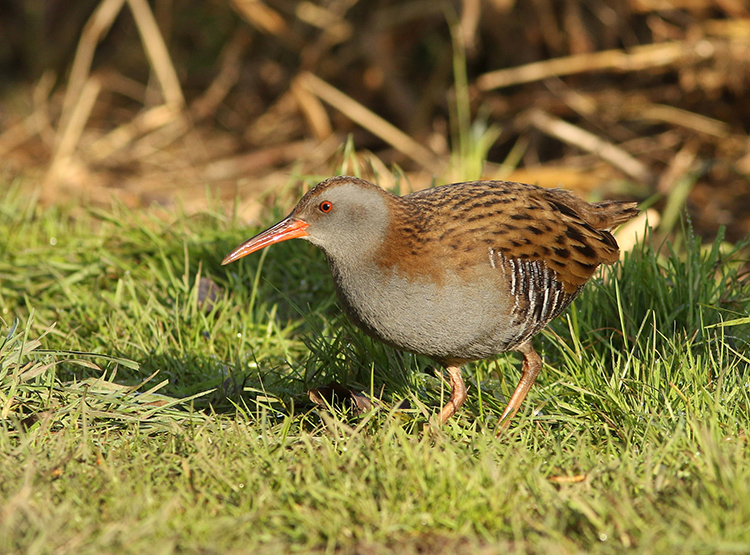 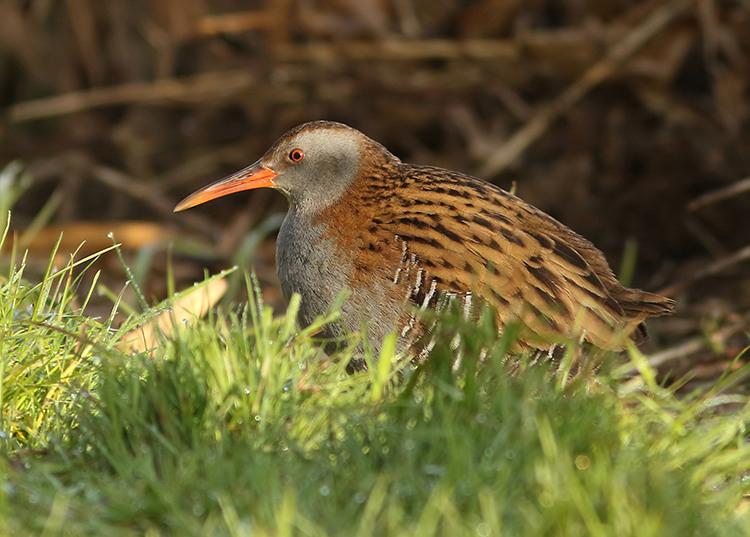 I had a brief visit to Nethergong on Saturday morning but with quite heavy fog on arrival which really didn't lift at all for a few hours, I didn't stay for that long. A  Woodcock was seen at the light picked up and Greylag Geese could be heard leaving the Stour Valley. A recording session during Friday night revealed some calling Teal (56) which were new for the year. Otherwise there were a few calling Water Rail, 2 Peregrine and the usual common suspects mostly heard. With some sunshine and better weather forecast for today I thought I would have a hide session for Water Rail. As I often walk around the lake I have been seeing the odd Water Rail on the paths which when I'm seen, they quickly disappear so with this in mind, I have been putting down a few mealworms as I pass by. I have also put my trail camera out on a few evenings which have resulted in a Water Rail which seems to have taken a liking to the meal worms. I decided then this morning to get there early and set up the hide near the path. As I walked around the lake this morning to the area the Water Rail was seen briefly before rushing into the reeds. I was soon set up and with a few mealworms put out, it was a case of just sit and wait. The light early on was not good and it wasn't too long until the Water Rail appeared from the reeds. It was as predicted very skittish with every noise sending it running back in to hide before venturing out again. It slowly got more confident and with the light getting better, I was able to take a number of pleasing images of these secretive birds. With more time I'm sure I can get much better images and will hopefully return soon again to have another go. Before going home I had a brief walk around which revealed c300 Lapwing and a flock of c30 Golden Plover (57) flying quite high to the north. I recorded again Saturday night and going through found a call which I wasn't sure whether it was a wader or duck. A few replies back and it seems the general consensus is that it was a Ringed Plover (58), albeit with a slightly strange call. A new bird for the site. 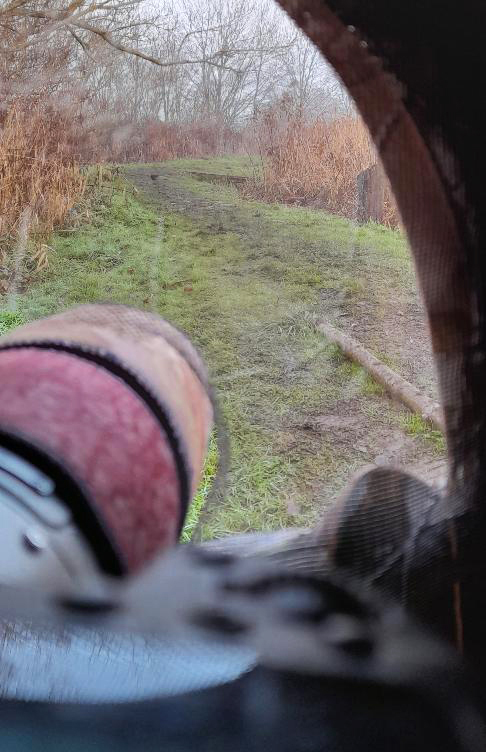 View form the hide (Water Rail on the path- honest) 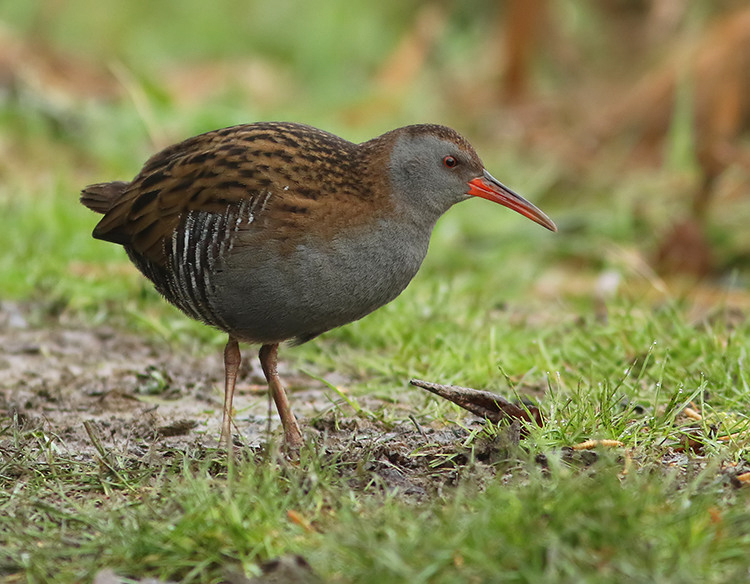 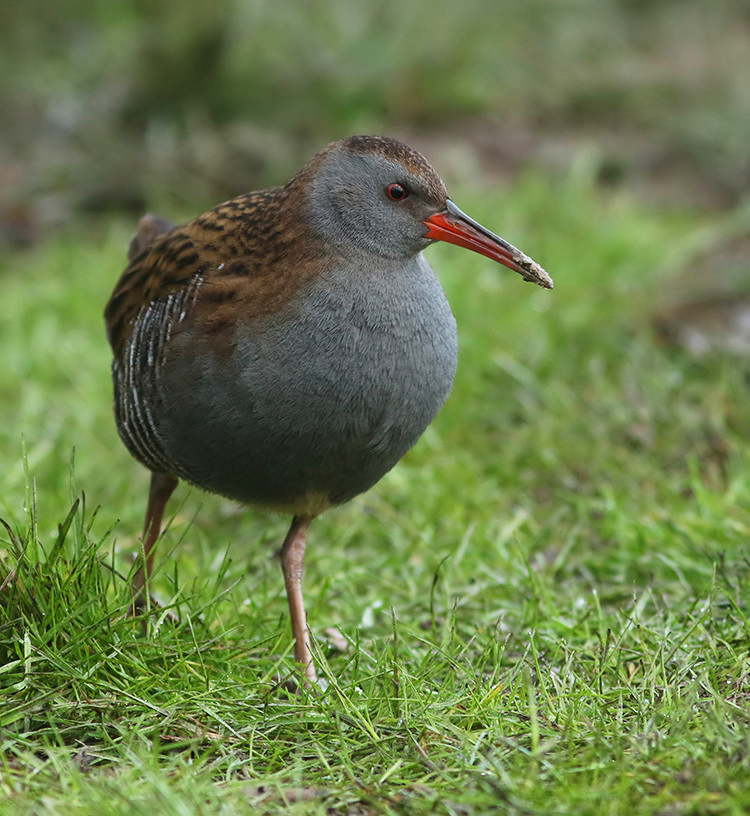 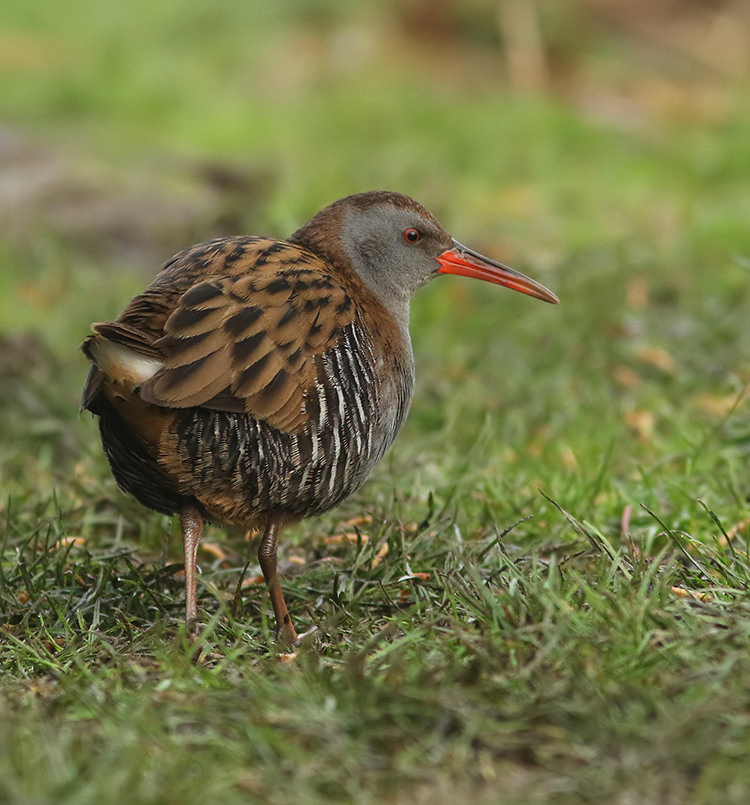 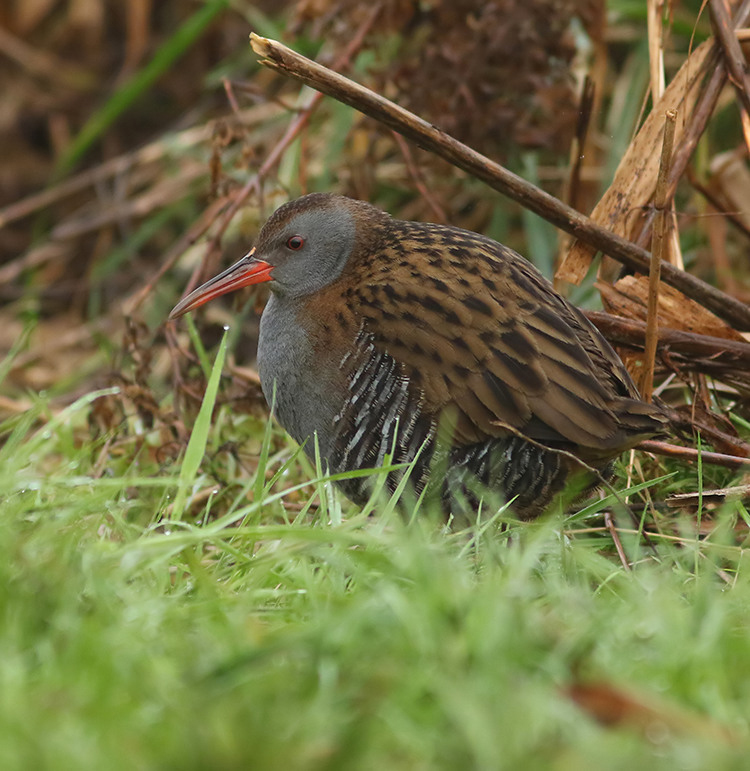 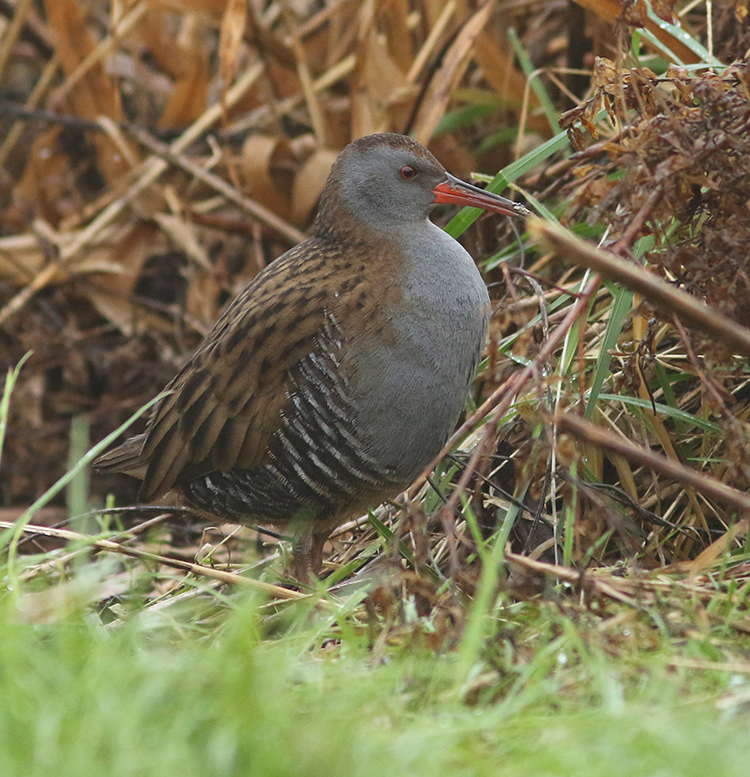 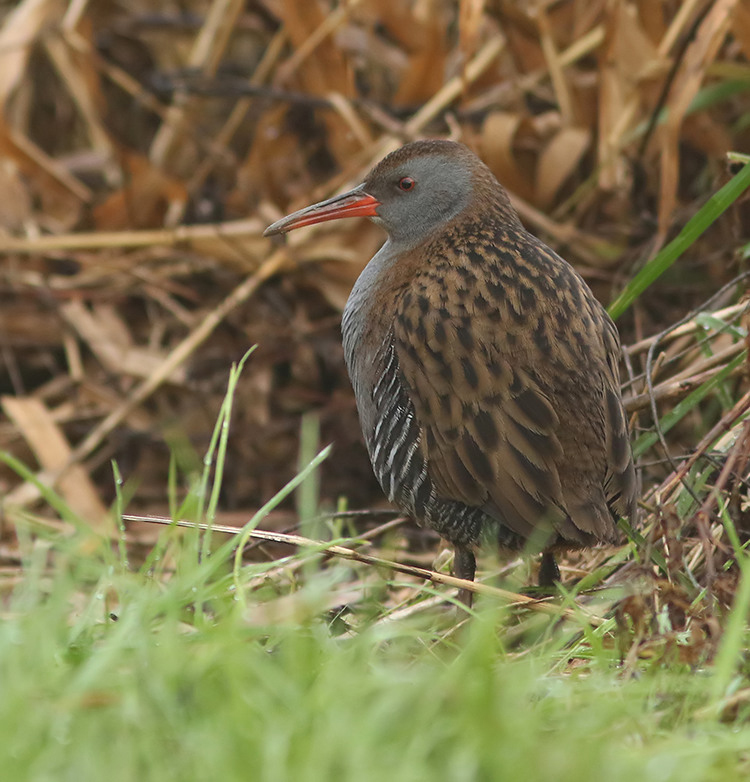 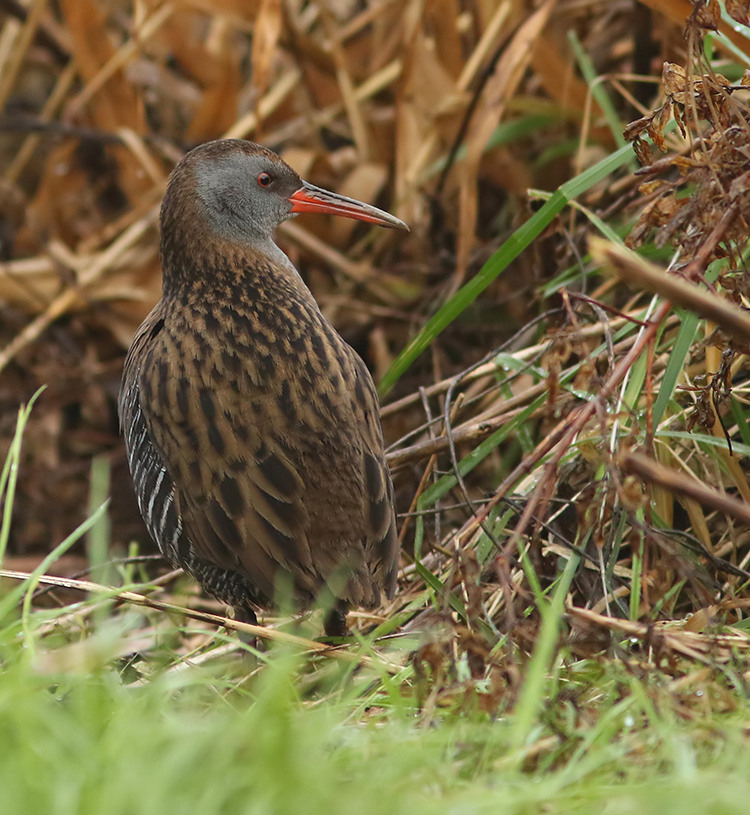 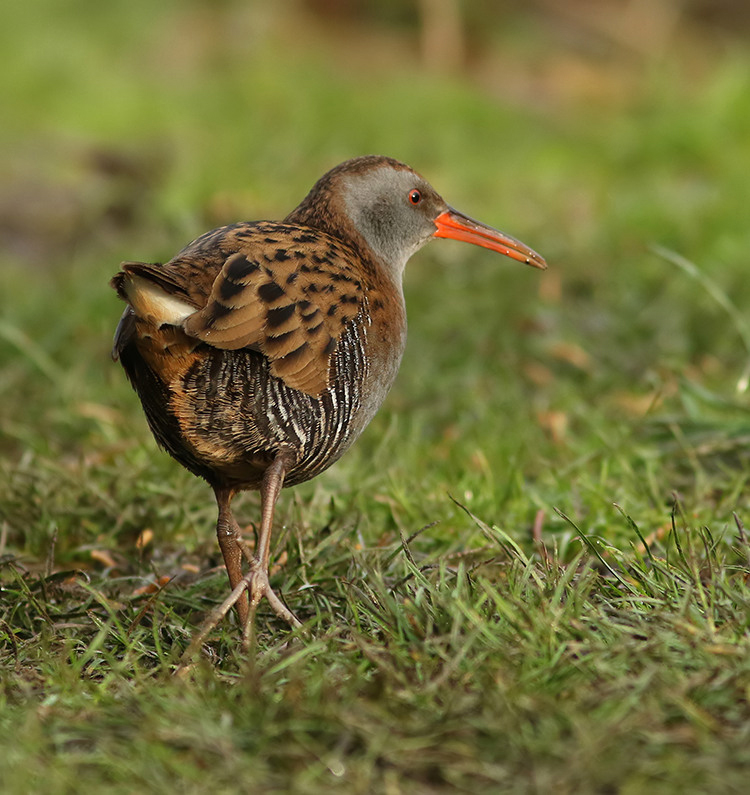 I had intended to bird the Stour Valley on New Years Day but with a painful knee at the moment (operation in 4 weeks time hopefully) I instead thought I would bird most of the day at Nethergong where the walking is greatly reduced. I arrived at 6:45am where I sat in the car in the layby opposite the site and listened to the day waking up. The first birds of the year were Greylag Geese which could be heard calling from the Stour Valley. As the light picked up I made the first of a few laps of the site and also checking the surrounding fields where in a few hours I had logged 51 species, very respectful for this small site and the time of the year. Most of the common birds were seen or heard but a few obvious omissions included Dunnock, Reed Bunting, Marsh Harrier and Pied Wagtail. I'm pretty sure I heard a Brambling calling but listening again for its called proved fruitless. Other birds of note seen or heard included 2 Woodcock, 1 Snipe, 2 Grey Heron, 1 Kingfisher, 2 Green Woodpecker, 1 Treecreeper, c200 Fieldfare, 1 Water Rail, 1 Yellowhammer, 3 Common Buzzard, 3 Jay, c180 Lapwing, 3 Sparrowhawk, 1 Mistle Thrush, 1 Little Egret and 2 Stonechat. Around midday and with the sun shining I had an hour or so in the hide watching and photographing the birds. Annoyingly as I arrived 2 Jays were feeding on the apples I had put out but they didn't return after. The local species kept me and the camera entertained though and I ended up with a few more photos. After another walk of the site and a check at the eastern gate for raptors where nothing else was added, I left for a brief look at the Stour Valley at dusk. A pleasant casual day and always nice to get the year list started again. 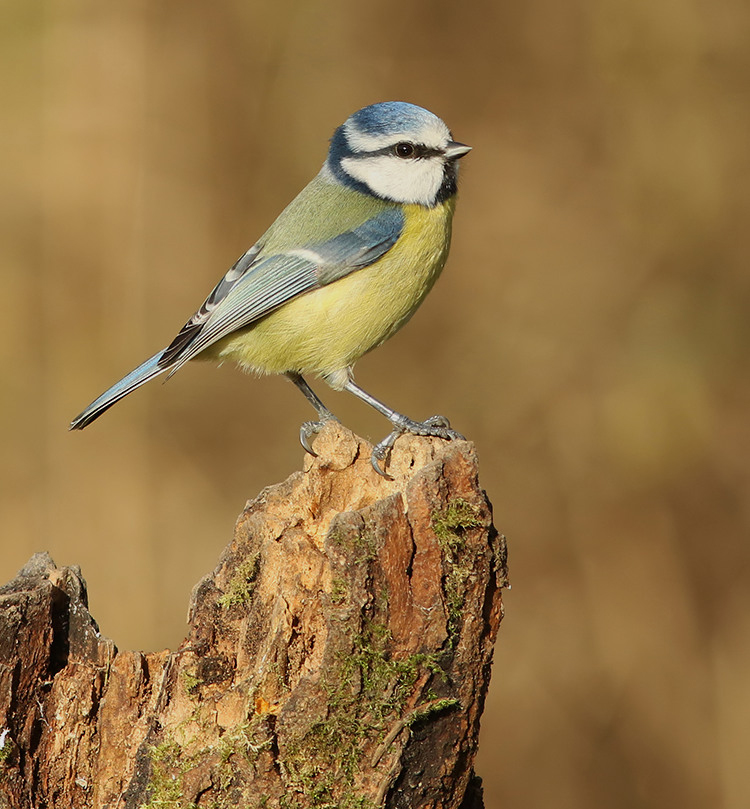 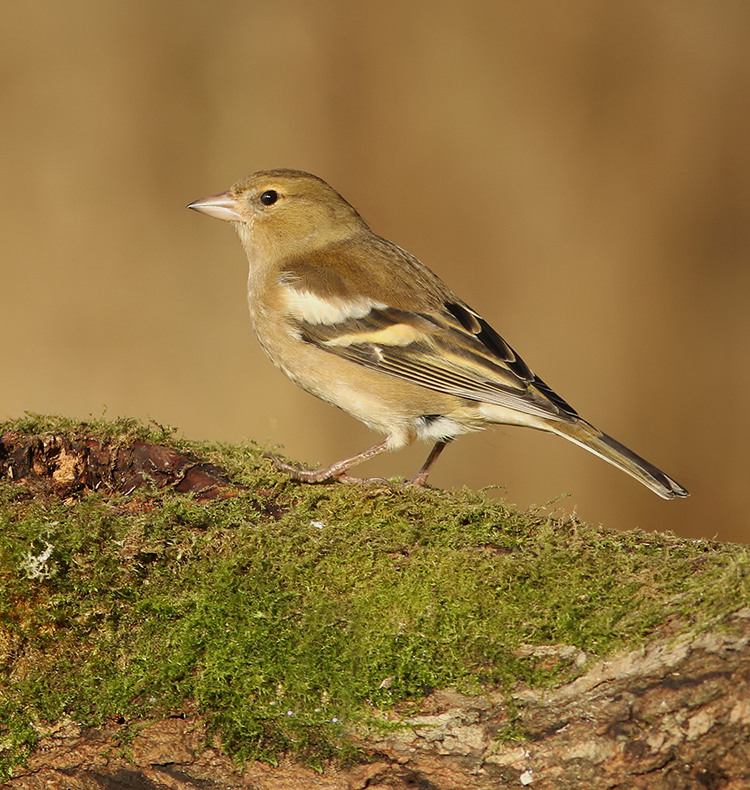 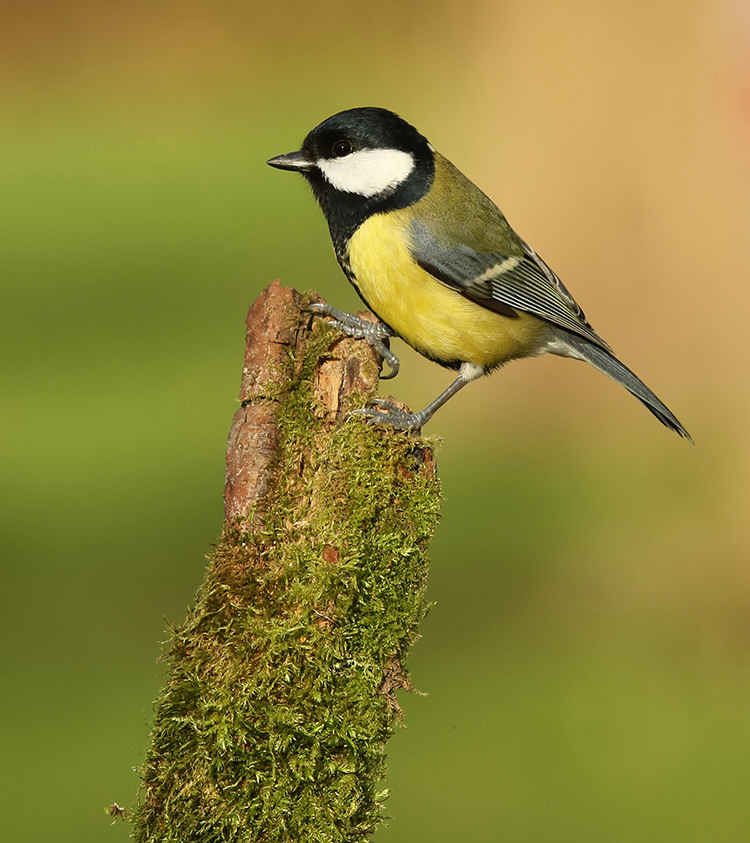 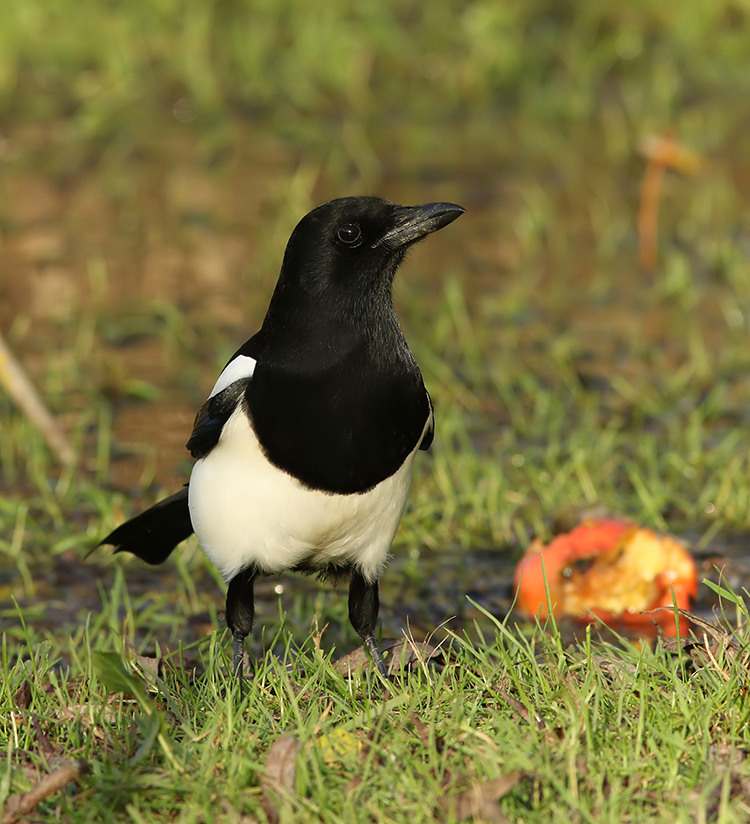 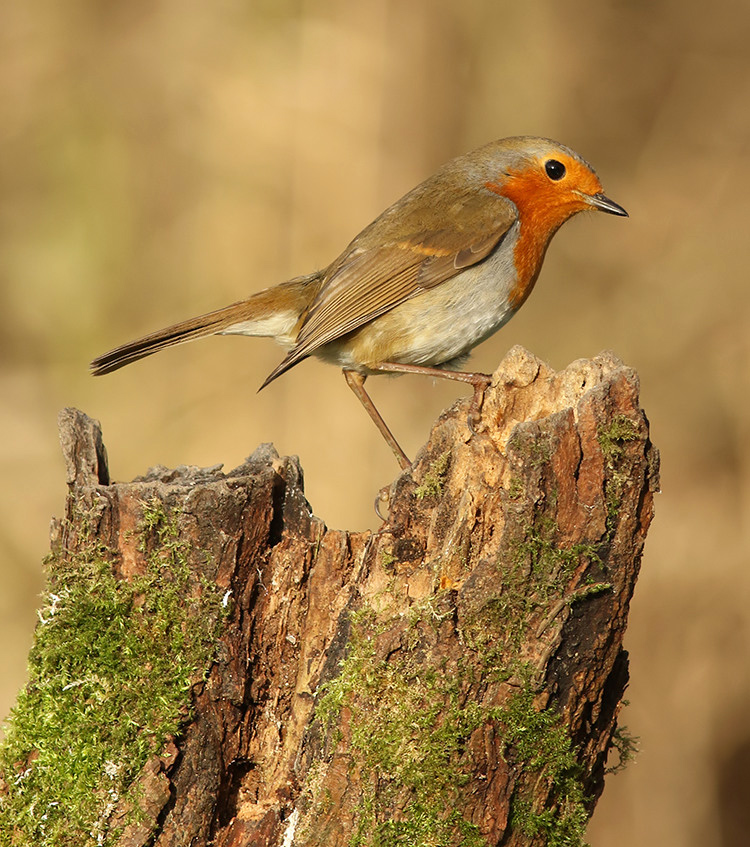 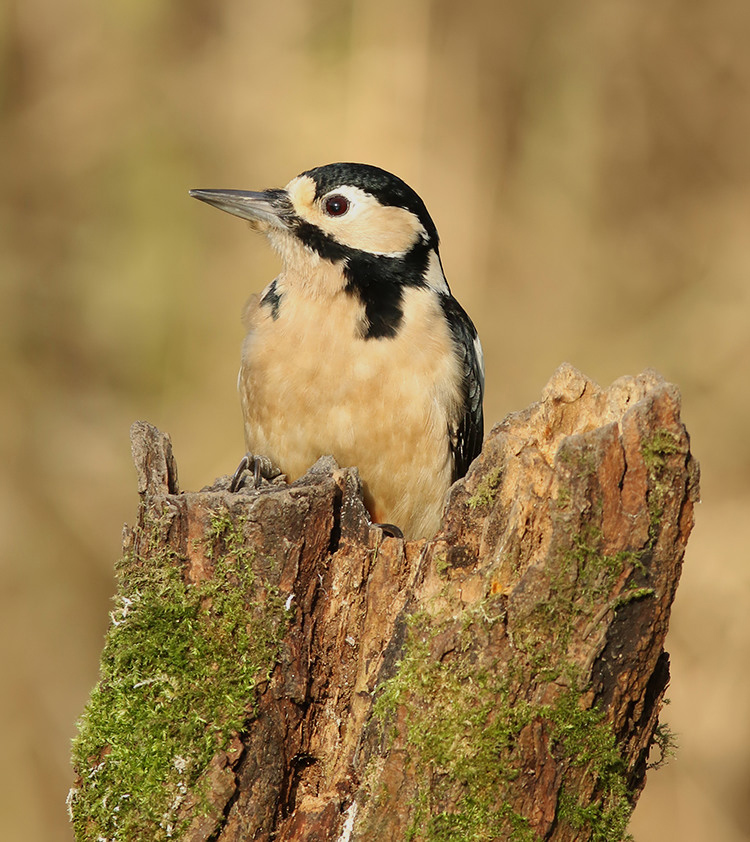